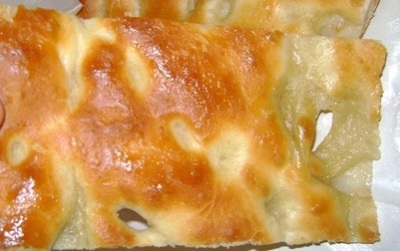 For garnishing: salt coarse, to taste

The focaccia from Genoa, called in dialect “a fügassa”, is a traditional recipe of Ligurian cuisine, and its original preparation is so rooted in Genoa people, that the focaccia is now under the protection of the Slowfood Association.The origins of the true focaccia from Genoa date back to time out of mind, so much so that now it’s prepared anywhere in the world, even if it’s practically impossible to recreate the same fragrance outside of the city of Genoa. The focaccia from Genoa should be ¾ inch thick, crispy, soft and crumbly, never gummy, shiny from oil (the extra virgin olive oil is better because it enhances the flavour spectrum); some people spray it with white wine before baking.According to the Slowfood Association, the working time shouldn’t be less than 8 hours long, therefore with a very long rising time. What we suggest here is a little quicker version, as good as the original one.

Dissolve the salt in lukewarm water and pour it into a stand mixer (or in any other bowl if working by hand), together with the malt (or, as an alternative, the sugar)

and 3 tbsp (40 ml) of olive oil; add half of the flour in the bowl and knead until you have an even and rather liquid batter.

Now add the crumbled fresh yeast and knead for 2-3 minutes more, after that add the remaining flour and knead again until you have an even mixture (which is quite sticky).

Grease the baking pan with 4 tbsp (50 ml) of extra virgin olive oil, sprinkle a small amount of flour on the work surface and place the dough on it, then knead it for a few seconds to give it a rectangular shape and put it in the oiled baking pan.

Now brush the dough with the oil contained in the pan and let it rise for about an hour or an hour and a half at about 86°F (30°C), until doubled in volume (you can turn on the light of the oven and put the dough inside with the door closed).

After such time, take the focaccia dough and roll it out into the baking pan, making sure that there is still plenty of oil under it.

Brush the surface of the focaccia with oil, sprinkle with coarse salt and let it rise again at 86°F (30°C) for about half an hour.

After half an hour take the baking pan and press deeply the fingertips into the dough, without breaking it, leaving the distinctive holes of the focaccia from Genoa on the surface.

It’s time to bake the focaccia in preheated oven at 390°F (200°C) for at least 15 minutes, but before this you have to spray the whole surface with room temperature water; take the focaccia out of the oven and let it cool on a rack before cutting.

The Genoa people usually don’t make the focaccia at home, simply because the one you buy at the bakery is better; the oven is actually a very important factor in order to make a successful focaccia from Genoa, and some of the ovens we have at home can’t reach the ideal temperature, which is quite high.When you bake the focaccia, open the oven door as least as possible, so as to avoid dispersing the heat with no reason.

To savour the focaccia from Genoa there are real rituals, one of which suggests you should eat it upside down so that your taste buds meet first the savoury salt, then the delicate oil and finally the soft dough. A way of eating the focaccia peculiar just to Genoa people, which makes all the other people horrified, is to dip it in caffelatte… the true Genoa people, indeed, can tell the quality and goodness of a focaccia right in this way.Try and you’ll be pleasantly struck!